Inspired by J.R.R. Tolkein’s The Father Christmas Letters and an antler I found one Christmas Eve, I began writing letters from Santa to my children in 2004. When my sons grew too old for such things, there was a lull in the letters—until three years ago, when I passed on the antler with a letter to my neighbor’s young boys. The letters are among my favorite Christmas traditions and so I am pleased to continue it for another year and to share the fun more widely here with you.
Click to view larger. 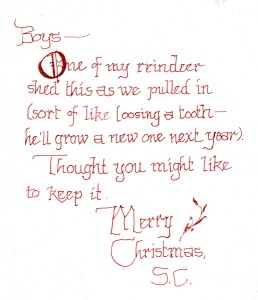 The letters often include responses to questions asked by the boys in their letters to Santa—in this case, “Do penguins come to the North Pole?”

26 thoughts on “The Christmas Letter”