Sharp spines, thick shells, noxious odors — the lengths a tree will go to protect its seed! I found these while exploring a local cemetery in my new hometown. 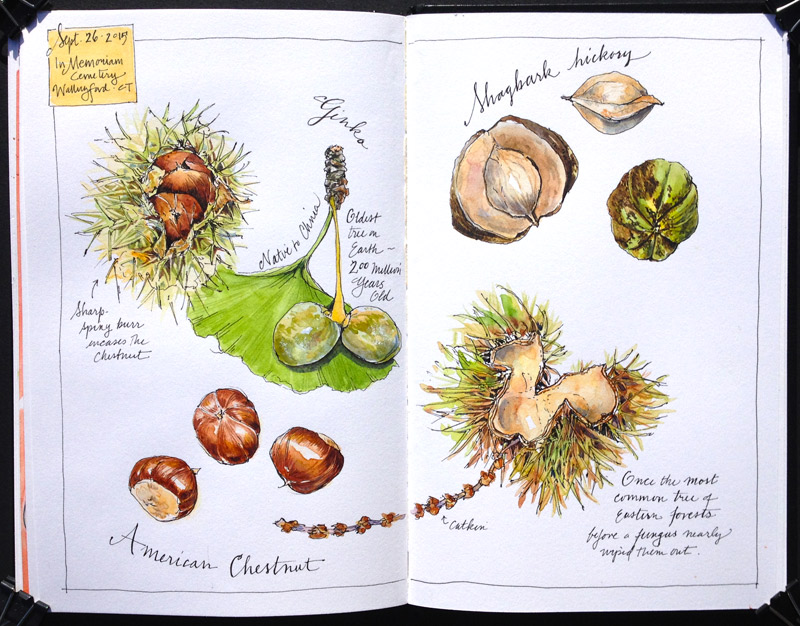 Alive among the dead, the American chestnut really caught my attention. Once the predominant tree of Eastern forests, they are a rare find today. A fungus nearly killed off the entire species by 1940. In contrast, the ginkgo is an ancient survivor. Native to China, but planted widely in cities, ginkgoes have been on Earth since the days of the dinosaurs. I had never seen the nut before and, as it turns out, for good reason. The female, seed-bearing trees are not planted frequently because of the noxious odor given off when the nut drops to the ground and is crushed. Hickories are widespread in the mid-west and eastern U.S., so they are not hard to come by. The thick husk and hard nut protect an edible seed inside.

This page was done a piece at a time, starting with the chestnuts. I drew them directly in pen on location because the spines were so sharp I could not carry them home. I collected the ginkgo and hickory nuts and sketched them at home. Much of the watercolor was done with a very dry brush to get the detail. I added the text last with a micron 02 pen. (Stillman & Birn Zeta journal)