Had I lived in the late-1800s, there’s a good chance I would have been a bird egg collector. Backyard collecting, exchanges, and sales were popular during the Victorian era, and I can see easily the appeal of amassing a collection to study and admire. But since collecting became illegal with the Migratory Bird Treaty of 1918 (thankfully!), I rely on museum collections for an occasional egg fix. 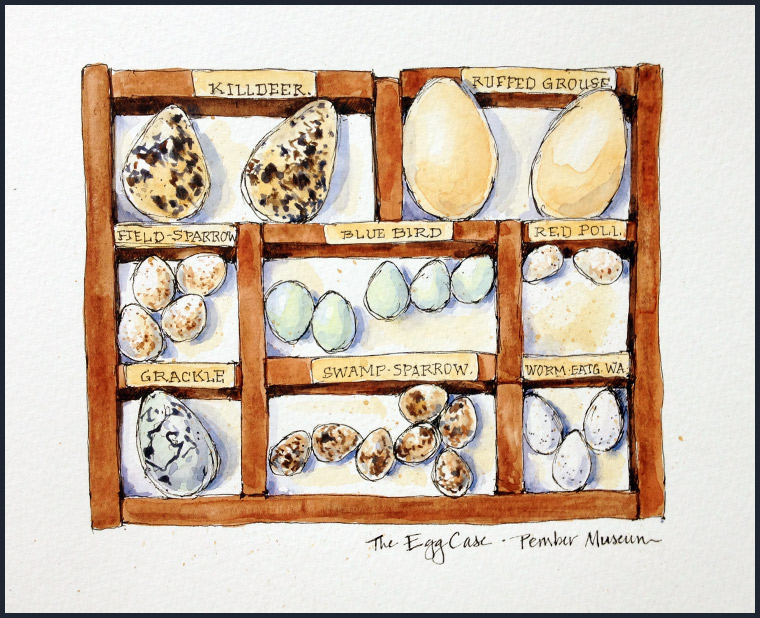 I sketched this section of a much larger display at the Pember Museum of Natural History in Granville, NY. I only had about 30 minutes, so I sketched directly in pen and painted later at home, using a photo and reference books for the colors and patterns. If I were doing a careful painting, I would work in pencil first so that I could get the edges of each egg smooth and clean. But in this case, that kind of accuracy didn’t matter to me—I just wanted to have fun collecting on paper.

Celebrating One Year! On another note, it’s been year since I started I this blog and I want to thank you for following it! I began with a couple of posts on bird nests and eggs, so perhaps it’s fitting to come full circle and be back on that theme a year hence. I love hearing your thoughts, so keep on commenting…and share the blog as you see fit to widen its reach.

8 Comments on “The Egg Case”