I’ve been watching our newest neighbors as they take up residence in our yard. Bluebirds recently fledged from one of our nest boxes and a brief battle for the box was won by a pair of house wrens. There are not really four birds, as depicted, but I wanted to capture the pattern of the pair’s activities during the nest building stage. These poses were repeated over and over as I sketched. You’d think that would have made it easier, but wrens aren’t known for standing still. I switched between using binoculars and picking up the pencil to make the initial drawing, then added color later. I like the way the poses capture the some of the story of the wrens setting up house. 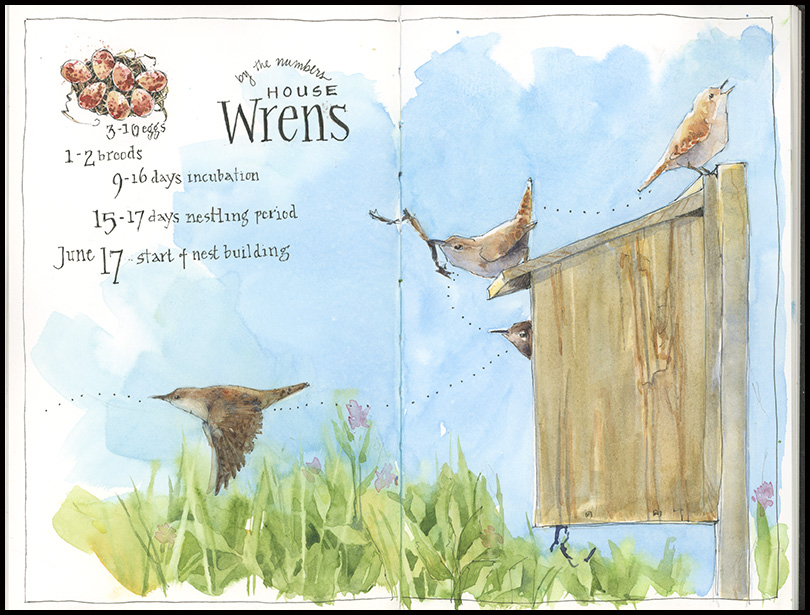 Tips and Techniques– I used a pale non-photo-blue pencil to make my initial sketches of the wrens. This gave me a chance to work on the postures before committing to ink. A regular pencil would have been fine, too, but the blue pencil is easy to erase and cover over with paint. It’s a handy tool for birds and other tricky subjects.

My second tip is for those of you who have nest boxes: be sure to monitor them. Open the box quickly about once a week to check on the nest, eggs, or young. This will give you a good idea of what species are using your boxes, whether they fledge successfully, and whether there are any problems. My bluebird nest became infested with ants and I was able to remove it once the birds fledged so that the box was clean for the next inhabitant. There’s good information about nest box monitoring and a code of conduct here: https://nestwatch.org/